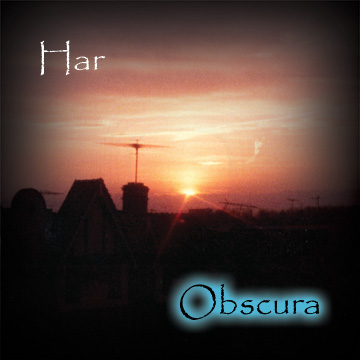 You've found the official home of Obscura, the second solo album by ambient guitarist/bassist/Chapman Stickist Har.
Here you'll be able to hear streaming samples of the tracks, purchase the album, read the stories behind the songs,
download press-kit information, and more.

"Another masterwork by an artist who transforms guitars, basses and chapman sticks into instruments of sublime depth and subtlety. Fan's of Har's seminal 'Dream Tower Blueprints' will find much to love, and folks who like the music a bit darker would be well advised to check this album out. Very highly recommended."
--Darrell Burgan, AKA "Palancar" - Stillstream.Com, ambient recording artist

"... the opening/title track of ambient guitarist Har's release, Obscura, ... works to establish that the majority of the sounds here come from guitar, Chapman stick, and eight-string bass (tabla and field recordings round out the list), played by someone who obviously knows his way around the strings. It's also just about the last you'll hear from an unprocessed, recognizable guitar on this excellent, atmospheric disc. ... with Har choreographing the graceful interplay of his textures, forms and ideas. Each track stands perfectly on its own, while also acting as the well-thought-out parts of the larger whole. And that's what makes Obscura a disc worth returning to for repeat listens, and a Hypnagogue Highly Recommended CD. "
--John Shanahan, Hypnagogue Music Reviews